In 1435, Sean MacGregor, as yet childless, settled a gambling debt by selling every fourth-born son of his descendants into slavery to a druid. This druid later founded Celtic University and recruited other druids to be its staff. The staff recruited the MacGregors to run time travel errands for them. Crossed out names indicate deceased clan members. 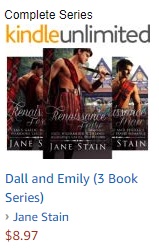 Because Peadar came to the future when he was grown up

Peadar and his father, Dall, are the same age and his sons are close to the same age as their uncles. These six boys (Tavish, Tomas, Meehall, Connell, Friseal, and Eoin) grew up together at their parents’ Renaissance faire. In their teens, they all had steady girlfriends whom they broke up with ‘for their own good’ when they all were told of The Family Curse on Tomas and Tavish’s 18th birthday.

Teen couples at the Renaissance Faire

Dall’s brothers, Bran and Osgar, and their offspring, and so on

Where you can find each character

Individual Books: Time of the Fae, Druids or Faeries (May 2019), Time for the Clan (July 2019)
Donnan, Suellen, Connell, Ashley, Friseal, Marybeth, and everyone else above (Grand Finale)