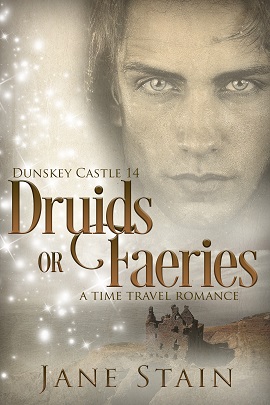 It wasn't every day the faeries claimed the man your friend loved.

So Marybeth did her best to comfort Suellen. She had her arm around her
and kept hugging her and saying “Shh, it's okay” as they walked along the
Scottish sea cliff. They passed by the iron-age underground fortress where,
in 1100 years, Robert Adair would build Dunskey Castle.

She would stay here in the distant past and support her friend for as long
as Suellen could reasonably be expected to stick around looking for
Donnan. A week, tops. Marybeth could only afford to miss one
more Thursday at the ’Til Two. Any more, and her teammates would find
a new darts player.

Everything Suellen said reinforced Marybeth’s resolve to get away from here.

"I ken everyone's mad at Donnan for gang off tae find the faerie horn when
he should hae been here when the Romans attacked. Wull I dae ken. But he
was ainly trying tae break the clan’s druid curse."

This was about as many words as Suellen ever got out before she drifted off into sobs.

They would walk along for 30 feet or so, and then Suellen would start in again.
"He was sae good tae me, Marybeth. Ye dinna ken how good he was tae me. He fought
those Romans off me. He killed two dozen o’ them who had taken me prisoner and
were gaun’ae make me a fort slave."

"Donnan does na even mind that I dinna ken how tae card wool or herd sheep or
clean the skin o’ freshly killed game. He is sae understanding. I need him back,
Marybeth. Tell me they're gaun’ae find him and bring him back."

Sobbing and blubbering and crying, the tears soaking into Marybeth's right shoulder.

Fortunately, the clothes Marybeth had borrowed to wear in this ancient time were
thick wool. The air was chilly, but the wool kept her warm even when damp.
Something to be thankful for. No, nothing Suellen said made Marybeth want to
stay here in the year 71 AD one minute longer, let alone a week longer.

Marybeth felt somewhat safe with Cathaleen, the woman she and Ashley stayed
with while Suellen gallivanted over the Scottish Highlands with Donnan. Cathaleen
was cool. She was teaching Ashley and Marybeth how to make herb remedies, which
were popular back at home in the 21st century.

Marybeth was looking forward to showing off her new skills when she returned to the
future. She imagined the faces of her teammates when she whipped out one of her
new vials and relieved someone’s headache. There were also skin moisturizers the
women at work would like, and even a mixture meant to remove makeup. Who
knew women in this time wore makeup? Kohl on the eyes was apparently widespread
the world over. Of course, the Gaels claimed to have come from Egypt, so that
might explain it.

Ashley and her old friends from the future, Connell and Friseal, had rushed on ahead of
Marybeth and Suellen. Marybeth wasn't even sure they remembered she and Suellen
were with them, they looked back so infrequently.

But Ashley looked back now, and seeing Marybeth and Suellen so far behind, she broke
away from whatever she'd been chatting about with Connell and Friseal. "Suellen,
Connell and Friseal wull get Donnan back. They hae a good plan. They wull invite
Kelsey here with a request tae talk. She always has the faerie axe with her. If she
does na give it back, they wull surround her and take it by force."

The path wasn't wide enough for all three of them to walk side-by-side, and Suellen
was already latched onto Marybeth, so Ashley walked in front of them, having to
turn her head once in a while to see the expression on Marybeth's face. She did now.

Ashley batted the air as if what Marybeth had said was dismissible. "The faeries gave it
tae Ciaran, who gave it tae John. Kelsey stole it from John. 'Tis na wrong for John tae
steal it back from her."

Connell and his brother Friseal were back with them now.

Connell stuck his chest out and his chin up in a show of bravado. "Darn straight,
‘twas stolen from us. Kelsey's gotten full o’ herself, syne she went off tae
Celtic University. That, or she has been brainwashed by all those Druids. We used tae
be friends, but now she's gone tae far. We wull be taking that axe back from her sae
we can save Donnan. End o’ discussion."

My ebooks are all in Kindle Unlimited 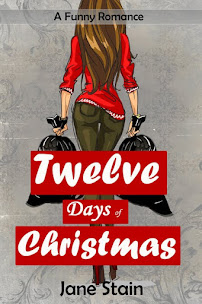